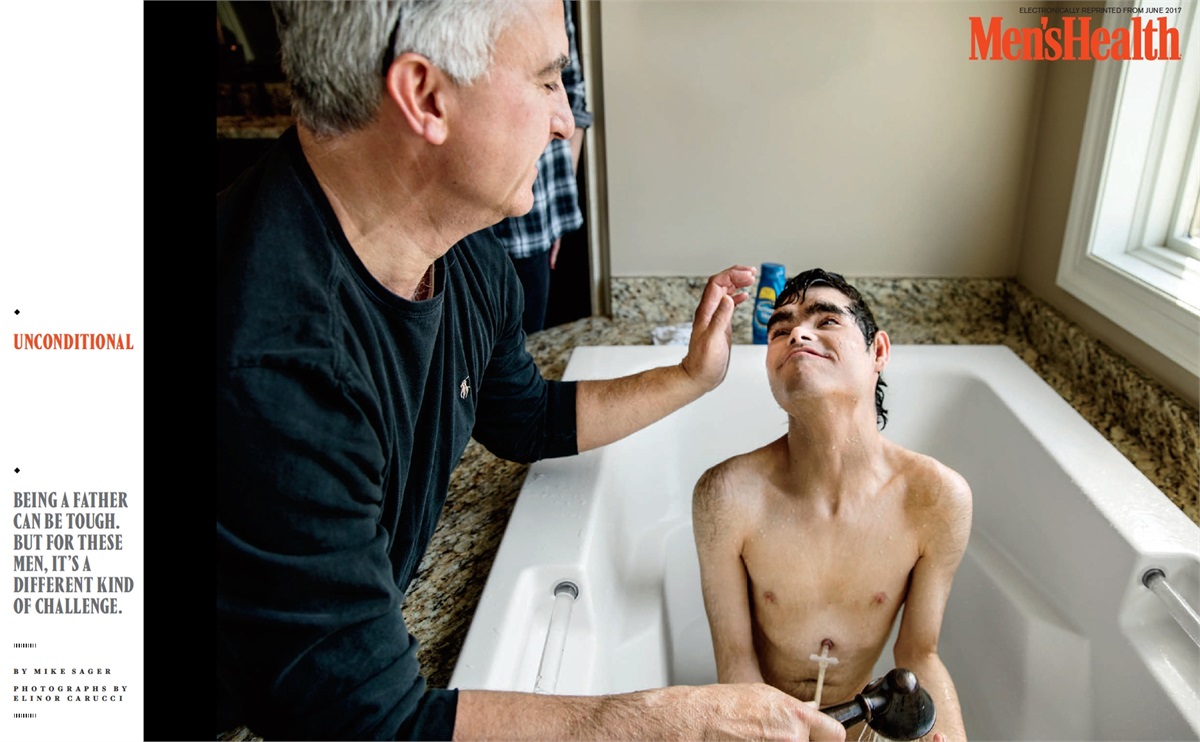 Emilio “Jack” Morrone lives with his wife and two of his kids in a house on a little hill in Pennsylvania’s Lehigh Valley. A shiny scale model of an antique locomotive sits on the gently sloping lawn, a salute to the pas- sionate interest of their son Dominic. Beside the house is a pool with a large shallow sec- tion, just 11 inches deep, so their oldest son, Anthony, can safely loll in the water under a watchful eye. With a wrought iron fence surrounding all, it’s a thoughtfully designed fortress of child rearing, a reflection of the goings-on inside.

It’s Sunday afternoon and Jack is in the kitchen rolling dough. A good-looking guy with a full head of gray hair and the begin- nings of a belly, he wears black-framed Clark Kent glasses that give him a thought- ful, mild-mannered look. He has only one hobby—making pizza from scratch. Outside on the patio, his professional-grade wood- fired oven, crafted of gleaming steel with a tall stovepipe, brings to mind Dominic’s loco- motive. Whether it’s 19 degrees outside or 90, Jack will be cooking his latest creation. That his pastime was inspired by Dominic’s love of pizza tells this story front to back.

Leaning against the refrigerator is Leslie, 51, Jack’s wife of 29 years. The two of them designed the house especially for the boys. It’s completely childproofed—no lamps, curtains, or coffee tables—and has a guest room for the eventuality of live-in help. Les- lie attended the same high school as Jack, though not at the same time. Later she was the bank teller who cashed his paychecks every week. When it came to a relationship and marriage, they never waffled.

Anthony, 26, is crawling around the living room and vocalizing. At age 9 he began try- ing to walk. Perhaps in part due to his clubbed feet, he eventually stopped trying, but not before pulling himself up to the kitchen counter and turning on the water, causing a minor flood. In a few minutes, Anthony will gather his sippy cup of PediaSure, muscle up onto the master bed, and put himself down for a nap. At 4'10" and a wiry 95 pounds, he has the cognitive ability of a 9-month-old and will be in diapers for the balance of his lifetime, which Jack and Leslie expect will exceed their own. He has a permanent feed- ing tube. His seizures—sometimes multiple events a day—are a source of constant worry; he’s often stricken in the middle of the night.

Dominic, 22, is in the office nook, simulta- neously posting on Facebook, watching You- Tube videos of trains, sending emails, and playing a video game, backing a truck toward a loading dock again and again. If you didn’t redirect his activity, he’d do it all night.

Everywhere Dominic goes, people know him. Women give him hugs and cops laugh with him; a fireman once gave him a real fire helmet. A former Parkland High School homecoming king (the jock who’d been elected king abdicated the throne in his favor), Dom loves cops and firemen and trains and trucks. For some reason he thinks all African American men are truck drivers, which can be embarrassing, especially when he approaches them with his usual friendly greeting, “Hey, Trucker!” A solid young man at 5'0" and 185 pounds, Dominic’s cognitive age is about 5 years.

The Morrone boys were diagnosed with an extremely rare genetic abnormality that escaped the eye of the best specialists they consulted during their first forays into genetic testing. In between the two boys, Jack and Leslie had a daughter, Gina, a gifted and popular scholar-athlete who attended a top-flight university and lives in Manhattan. It was only after a Brazilian study was published, about a family carrying a similar syndrome, that geneticists pieced together an answer to the Morrone boys’ condition. The syndrome affects only men. Women are the carriers. The Morrone’s daughter is not.

“It’s like someone waved a magic wand and your children don’t grow up,” says Jack, his matter-of-fact delivery suited to a guy who works as a CPA and financial manager. Jack also does most of the cooking and pulls a full load of child care. “From now until we die, my wife and I will be the parents of a 9-month-old and a 5-year-old.”

“The upside is that over two decades, we’ve gotten better and better at being the parents of a 9-month-old and a 5-year-old,” says Leslie, completing one of her husband’s thoughts, as she often does. A fair-skinned blonde, Leslie is the family’s traffic coordinator; both boys have multiple special needs to be addressed, doctor and therapy appointments to be booked and kept, activities to be organized, and prescriptions to pick up. She works as a hostess at a popular restaurant in nearby Allentown. “I do it mostly for my sanity,” she deadpans. Jack is the straight man; Leslie is the wry foil. 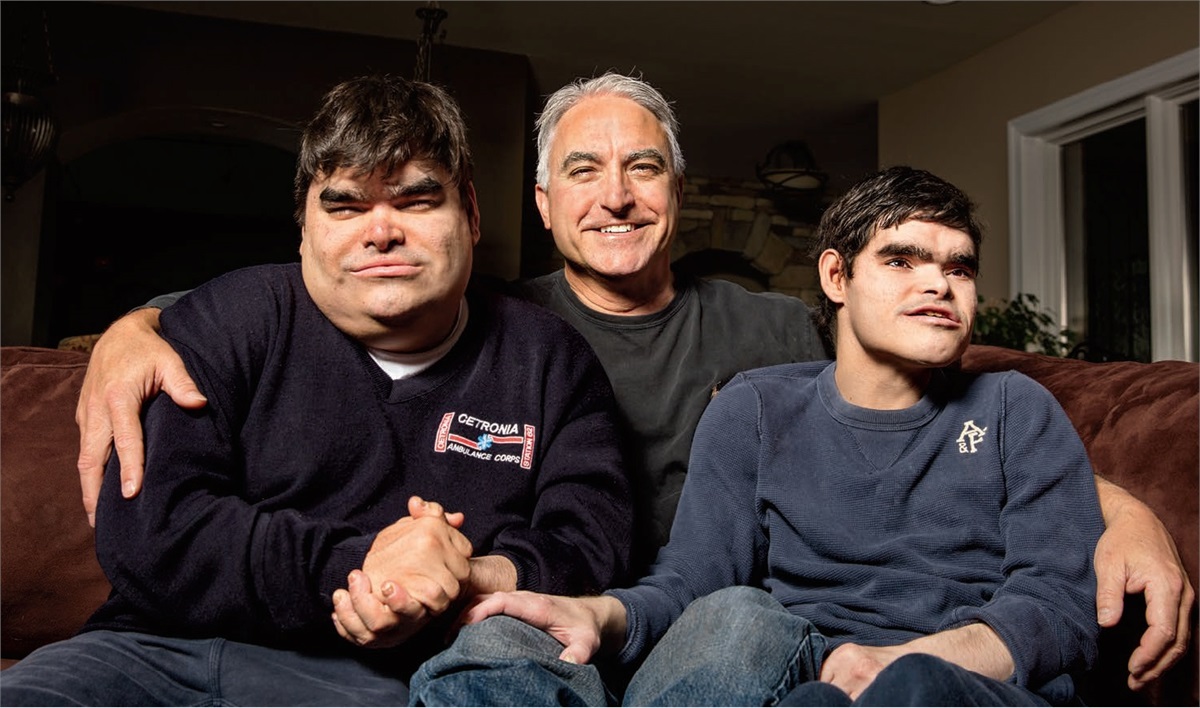 For Jack, Being the father of two sons with special needs has meant that his roles as a father and a husband usurp all. But he has his own pizza, of course, and he also hangs out with close-knit group of guys whose constant support means more to Jack than he needs to express.

With Anthony, the caregiving means feeding and changing and dispensing love. For Dominic, it’s all about the modes of transportation. Jack and Dom will drive to a diner at a New Jersey truck stop to sit for hours, just watching the 18-wheelers come and go. Sometimes the two of them will take a train ride; lately they’ve been riding the local bus around town. On a trip to New York City, the two rode the subway for hours—one of the subway drivers on the orange line even honked the horn at Dom’s exuberant request.

Everywhere he goes, Dom has friends. The manager of the grocery store. The cashier at Wendy’s “There have been multiple times when I watch him and tears just come to my eyes; you can see the impact he’s making on the other people and community,” Jack says. “People know us because of him. Because of him, our world has opened up in ways it would never have otherwise.”

While it might seem that Jack has been cheated of some of the traditional rites and pleasures of American manhood – nobody signs up for a lifetime of chang- ing diapers – he says the simple joys of everyday life with his family more than compensate for a game of catch, a heart to heart about girls or work, or a boys’ trip to a ballgame.

“There’s a blessing in the fact that I still get to tuck my sons into bed every night and tell them they’re good boys,” Jack says. “There are these great parts of fatherhood that most kids grow out of. Like, we have the swing set out back. If I went to my daughter and suggested a swing, she’d look at me like I was crazy. By the time she was 13 that was over. But Anthony, at 26, would love to go out there and do it right now. If we didn’t have our two boys, would Leslie and I be as close as we are in this relationship? Would we be as happy as we are? Would we have the point of reference to understand what’s really important in our lives?

Jack and Leslie look at each other. No answer is necessary.

Posted with permissions from the June 2017 issue of Men’s Health, Copyright 2017. All rights reserved. For more information on the use of this content, contact Wright’s Media at 877-652-5295.

Click to view a PDF copy of the article