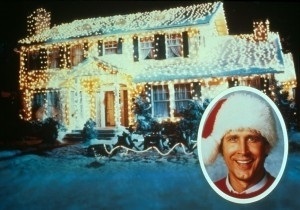 25,000 of them (Not counting the Santa, the eight tiny reindeer, and the “Merry Christmas” sign)

Those of us who can enjoy watching the same movie time after time, (I’m talking to the point that we can recite the actor’s lines and delivery in tandem with the movie itself) should enjoy the following.

One of the movies that falls under my repetitive never gets old reel is “National Lampoons Christmas Vacation”. In a particular scene, Clark Griswold and his steadfast and determined goal of stringing Christmas lights from his home is challenged. In the scene, Clark and his son are in the garage discussing how many lights are going to be strung to the house. His son quips “that’s a lot of lights Dad”, in a quick return Clark follows “I’m sure it’s a lot of work too, but if I’m going to be out in the cold and I’m committed to decorating the house I’m going to do it right and do it big. You want something you can be proud of don’t you?”

This determination, positive attitude and leadership are admirable and necessary in accomplishing certain goals that some would discard as foolish or impossible.

I have recently participated in such an experience that tested my resolve towards accomplishing something that I thought was completely out of reach.

For 10 weeks I was a candidate in The Leukemia and Lymphoma Society (LLS) Man and Woman of the Year campaign. This campaign is a 10 week fundraising competition that pits local male and female candidates against each other to see who can raise the most amount of money for LLS.

I decided to accept a nomination to the campaign in honor of two very important loved ones who sadly lost their life to Leukemia. I was proud to honor the memory of my stepfather and close personal friend who both passed away much too soon because of blood cancer.

I was extremely fortunate to have by my side many friends, family, colleagues, coworkers and my wife Alesha. Without their help and Clark Griswold like determination, we would not have endured the ten weeks as successfully as we did.

The highlights of the ten weeks were many including raising over $33,000, being awarded the Mission Award by LLS, and being a part of a collective group that rose over $300,000.

While I did not win “Man of the Year” I did feel proud to be raising money that will benefit so many people and their loved ones facing a blood cancer diagnosis. The money raised is used to support research that will create a better quality of life for the patients who are receiving treatment.

Of those who are reading and are involved in development and or fundraising, I sincerely applaud your efforts. It is a very difficult job. Most times involving uncomfortable and time consuming “asks” all while a significant stretch outside of our comfort zones. It is also an endeavor that is so important to the many charities and nonprofits of our community.

As the campaign concluded, I couldn’t help but feel such an awesome feeling of pride of my team and our accomplishment. Just as those 25,000 lights strung so neatly on Clark’s house radiated with a magnificent glow so did I.